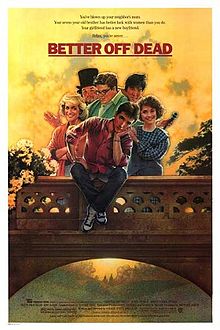 Lane Meyer (played by John Cusack) is dumped by his girlfriend Beth. Depressed, he tries to kill himself in numerous ways before falling for the French exchange student staying with a neighbor.

I admit, the plot sounds disturbing, but if you’ve never seen this movie, you gotta. Thirty years old, and we still quote it often.

“I want my two dollars.”

My kids are into music (3 sing, 2 play keys, 1 guitar, 1 dabbled in violin and trumpet), and I’m constantly looking for old music to expose them to. So this week, I thought back to my days in high school (graduated in ’93) and college, and came up with some of my favorites that they’d never heard before. Maybe these songs’ll bring back some memories for you, too.

– Anna Begins, Counting Crows (This entire album was great; Mr. Jones was the worst song on it. Great songwriting.)

– Kiss Them For Me, Souxsie and the Banshees (Anyone else from LA grow up on KROQ?)

– Missing, Everything But the Girl (The album version is stripped down from the radio version. Worth a listen.)

– Life is a Highway, Tom Cochrane (My kids thought this song was written for the Disney movie Cars.)

– You, Candlebox (Something sexy about this song.)

– Come Original, 311 (My dorm neighbors were from Omaha, NE, and they brought cassette tapes of early live 311 recordings for all of us to listen to. I was an easy convert. My husband calls me his Beautiful Disaster, another great 311 song.)

– The Unforgiven, Metallica (I had a high school boyfriend who gave me The Black Album. I’m not a Metallica fan in general, but this album is in my top ten. Every song is awesome.)

– Everlong, Foo Fighters (My favorite song of all time. Listen to the acoustic version. My kids have heard this a jillion times, but I had to put it on this list anyway.)

– Wonderwall, Oasis (Another one that makes you want to play guitar.)

–Closer, Nine Inch Nails (Saw him in Mesa, AZ, while in college at a small local venue. Vocals not so great live, but the music was thumping. Actually, this song is a little uncomfortable to listen to while packed in with a bunch of strangers. Not posting this video – adult only.)

– Glycerine, Bush (The song writing…”I needed you more, you wanted us less”…wish I’d written that.)

And yes, I could have added Nirvana and Pearl Jam and Busta Move and Wild Thing and Me So Horny…but I don’t think they’re forgotten. What are your favorite forgotten 90s songs?